Margaret Calvert, the designer who made our roads safer for 50 years

You probably haven’t heard of Margaret Calvert but you will undoubtedly know her work. Her self-portrait as a child — perhaps better known by the title School Children Crossing — would rival Rembrandt’s for recognisability. Another work in the oeuvre is her great still life, Cattle (its muse was a cow called Patience).

Perhaps her magnum opus must be Men at Work. Although, says Calvert, others have said that it looks more like “Man having difficulty with a large umbrella . . . Of course, once you see that, it just looks like a large umbrella, but I don’t mind that.”

This year, the road signs created by Calvert and the designer Jock Kinneir, her former tutor at Chelsea College of Art, turn 50. When she started the job in 1958, Kinneir told her: “If this takes off it’s going to be the biggest job that any graphic design team has ever tackled.”

He wasn’t wrong. Their designs became iconic and the lettering they created to go with them has been copied across the world. She has been honoured in an exhibition at the V&A and by the Design Museum and with that most august of all design laurels: a Banksy imitation. She has even been invited on Top Gear — although to judge by her comments on James May (“Such a charming, intelligent man”) you suspect she may not be a regular viewer. Thanks a lot for stopping by. Before we carry on I need to give thanks to http://www.londoniguide.co.uk/ for their continued assistance and the support of their network. Having a support team like this means a lot to us as we continue to grow our personal blog.

Calvert — a woman who could claim to have created some of the most famous art in Britain — sits in her bright basement kitchen in Islington, north London. At 79, she is technically a pensioner, having retired from a teaching post at the Royal College of Art. Yet with her smartly bobbed hair and dark clothes, she looks less like the OAPs of the infamous sign (not one of hers) and more like the chi-chi art college teacher she once was.

Although she is wary of the word “artist”. “So many people call themselves artists,” she says. “It’s a very . . . word.” She leaves a gap where the adjective should have been, but you sense it wasn’t flattering. “Self-satisfied” perhaps would fill it well. Graphic designer is the term she settles on. She will say that the road sign job was, as Kinneir predicted, one of the biggest, but is far from self-satisfied. “I cringe,” she says of the publicity it has brought and continues to bring her.

She bought her house many years ago when Islington was known as “the poor man’s Belgravia”. Inside, it’s plain, simple and bright; she sits at the sort of large pine table that was owned by leftwingers in the Sixties. A jokey “women at work” sign she made stands in one room upstairs; in the hallway a proper road sign pointing to “Margaret Calvert” leans against a wall, directing you to the ceiling.

While she’s happy to joke with the signs and to have others do so, it is clear how seriously she took the job. The children crossing image was, for example, slightly altered when the signs underwent digitisation and changed from her original. “To me that’s criminal,” she says. “That has upset me all my life.” She thinks that the pedestrian crossing sign is simply “not that successful. I think I put too much detail in . . . I think I put a cuff on instead of making it a smooth shape.”

It’s this sort of attention to detail that got her chosen for the job. After St Paul’s Girls’ School, she went to Chelsea College of Art. At the end of the course, many students went into teaching. Somewhat to her relief (“I couldn’t teach 40 unruly students. You’ve got to be a really tough person”), Calvert was saved from that when Kinneir invited her to work as his assistant. Does she know why he chose her?

“He said I always had my head down,” she says: she turned up early on his teaching day and worked hard. And so, by what she calls luck but others might call diligence or talent, she found herself in a small mews studio near Hyde Park Corner putting together the proposal for the Gatwick lettering — quite literally: she would cut out and stick the lettering diagrams on to its pages.

The success of Gatwick led soon after to the motorway commission. This was in the early Sixties: the M1, Britain’s first motorway, had started to unspool down the spine of the country; Wilson’s white heat of technology was blazing; and motorists were dazzled. Car design had improved but sign design remained static with erratic fonts, designs and sizes. Crashes were frequent.

The government decided that something must be done and that meant new road signs for the entire country, created by a combination of design and empirical testing. Kinneir was chosen and in turn hired Calvert. Today it seems absurd that such a small team would be chosen for such an enormous job but it was, thinks Calvert, necessary. “It had to be small. Anything bigger would just be another committee.” The implication being that, once you get a committee to design a horse, you get camels.

Calvert’s horses are most definitely a horse — or rather her ponies: just look at the “wild ponies” warning sign. This and the “wild animals” deer sign were based on a book about drawing animals in motion; the cattle sign was based on a cow called Patience on a cousin’s farm.

The children-crossing sign was based on Calvert herself but, as she says, fattened up a bit — she was a very thin child. She made other tweaks: it had originally been a grammar school boy with a satchel leading a girl across the road but Calvert switched it round “because I thought it looked more caring. People think it was women’s lib but it wasn’t.” The grammar school element was nixed and the children made to look classless. “It was more inclusive.”

The man at work was given a spade rather than anything more modern because anything modern would date. “The important thing about designing something that lasts is that you don’t make it a fashion thing. Technology changes.”

Among more abstract signage, the “no right-hand turn” also bears her mark (she sharpened the curve so that it was more visible behind the bar) and she and Kinneir also designed the lettering, and chose the shades of motorway blue, then later green, that were used for the signs.

Calvert was born in South Africa and her father was killed in a road accident when she was five. “That changed everything.” He’d just joined the army and got his commission to become an officer. “It was Saturday and several of them asked if they could go to the cinema. He was in the back of some van and they had an accident. It wasn’t their fault. My father was killed outright.”

Does she think there is any connection between his death and what she would later come to do? “No. The number of families I know who’ve had road accidents and bad ones, and also during the war; it happens. That’s life.”

Her mother, a trained nurse, started working to support the family. When apartheid deepened, her mother, appalled, moved her family back to England and so, aged 13, Calvert found herself sitting, failing, then retaking the exam for St Paul’s. In between the attempts she spent a year kicking her heels on a farm. While at St Paul’s, she was taught by the sister of the artist Victor Pasmore, who encouraged her to apply to Chelsea College of Art. The rest fell into place.

Her career was an extraordinary one (she also worked on the NHS signs) at a time when women didn’t often have extraordinary careers. but she’s reluctant to talk about feminism — “I don’t like the word ‘feminism’. I’m not good at isms” — although she does say that unequal pay for men and women doing the same job is “outrageous”.

Calvert still works (recent designs include the font for the gov.uk website) and she was a consultant for the lettering on the Moscow metro. She is altogether wary of the word “retirement”. “If you’re working in a coal mine or sweeping the roads — what I call ‘real work’ — you would want to retire. What I do now gets me up in the morning.”

And surely, perhaps, it gives her a small sense of pride that she was involved in such an iconic project. They are iconic, she concedes, then, as if suddenly doubtful of the term, repeats it. “I think that’s good . . . Iconic is OK . . . You think so?” I say that I do. Then, as if keener to reject praise than accept it, she says: “I’ve been described as a ‘living legend’ . . . I’m not sure about that.”

The Benefits of Digitally Printed Club Ties Can Prove Enticing 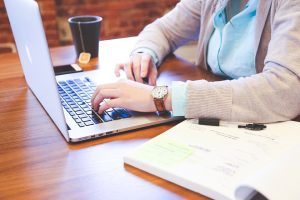 Why is Working from Home Becoming so Popular?

Security for Home Network and Connected Devices Takes Another Leap